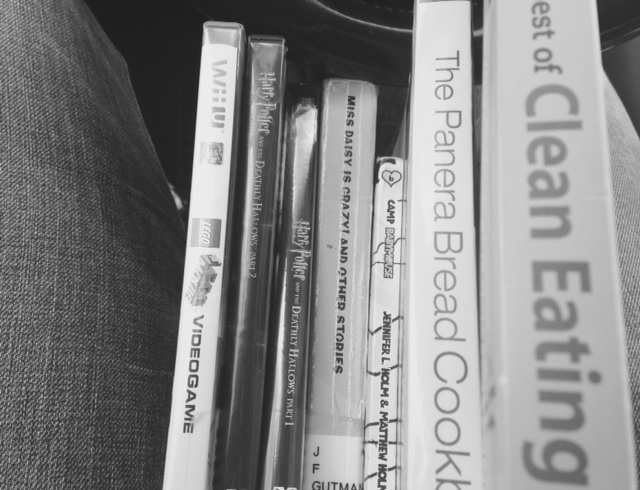 are far worse than

so I’m striving to do

and not be such a

as I take the time for

I have a little confession to make: I am a procrastinator…and a little forgetful.  So once I have procrastinated- even just a little bit– it’s quite possible that I have completely forgotten to do whatever that thing was in the first place.

We went to the library several times last summer, and once the girls were back in school- I simply forgot to return our books.  So, a few weeks past the due date, I dropped our late books off at the library. They were not open at the time, so I put them into the outside book drop.  I felt shame over how late these books were.

The thought crossed my mind that maybe I could get through their childhood without ever returning to the library again.

And then summer came once again…

“Let’s go to the library!” one of my girls suggested.

I admit that I came up with every excuse in the book to NOT go to the library.  Only because I didn’t want to face the shame of once again having extremely late books.  After a ridiculous amount of begging to go, I finally gave in and chose to act like a responsible adult. Surely my late fee wouldn’t be more than like $200?

As I climbed into the car, my other daughter reminded me that we still had one of the books from last summer.  I ran in the house, and sure enough- I found yet another book we had had for MONTHS.

The 5 minute drive to the library felt like 5 years.  I had a lump in my throat and felt like I was going to have a panic attack. We pulled up to the building and I slowly began my walk of shame, with the late book in hand. I approached the counter and began to fess up.

“Please forgive me.  I am ashamed, ” I earnestly confessed to the librarian- in those exact words. The lady behind the counter gave me a puzzled look. Clearly she had no idea how embarrassed I was.  She took my book, scanned it and told me the damage. She wasn’t phased in the slightest.

I couldn’t believe it!  And I was even more embarrassed that I had waited so long to face the music.

My fears of what might happen are always far worse than reality. How silly I felt for holding onto that guilt for all those months.

You know what is even better though?  That we can come to Jesus- no matter what our sins are, no matter what we have done or how much time has passed…and there is never any “late fee” to be paid.

How many of us don’t feel worthy of His forgiveness?  The sad thing is that we punish ourselves when we choose to feel guilty and ashamed of things we have done.  We all fall short- but His grace is sufficient, and He is there to catch us. In Christ, we are freely forgiven!  When we go to Him to ask for forgiveness and to make things right- He tells us our “late fees” have already been paid in full!

The lesson I learned that day was  priceless- far more valuable than that $40 late fee!

For the wages of sin is death, but the free gift of God is eternal life in Christ Jesus our Lord.  -Romans 6:23